Ocean Imaging received a contract from the California's Dept. of Fish and Game to image and map the entire California coastline for kelp abundance. The annual survey will be conducted in the fall and early winter when kelp canopy tends to be at its maximum. Kelp beds and associated reefs are a very important habitat along California's coastline and the CDFG regularly monitors and manages this resource.

Ocean Imaging received a grant from California's Office of Oil Spill Prevention and Response (OSPR) to develop a GIS system to help disseminate information during response to oil spills. The system will be accessible to both field and office-based users through an ArcIMS web server. Even users in remote locations or aboard ships and aircraft will be able to access the information through wireless networks. The system will allow access to archived information such as shoreline sensitivity maps, as well as newly collected data such as satellite and aerial images. OI is also testing hardware and software that will enable the transmission of aerial image-derived oil spill maps into the system directly from the aircraft in-flight.

The U.S. Minerals Management Service (MMS) has awarded OI new funding to continue development of algorithms and aerial sensors that enable the mapping of oil thicknesses within oil slicks on the ocean surface. Partnered with the California Office of Oil Spill Prevention and Response (OSPR), the initial project utilized natural oil seeps off California as well as controlled spill experiments at MMS' Ohmsett test tank in New Jersey to develop oil thickness sensing algorithms using multispectral aerial imagery within the UV-to-nearIR wavelength range. The Phase-2 work will extend the development of the algorithms and test off-the-shelf hardware components to allow the manufacture of portable, low-cost oil spill response systems. "Presently oil spills are assessed almost entirely by visual observation," explains OI's President, Dr. Jan Svejkovsky. "The accuracy of these assessments is greatly dependent on the level of training and experience of the observers. Our aim is to take the subjectivity out of the surveys and let computer programs do the work." An additional advantage of the oil spill imagers will be their ability to immediately disseminate digital GIS-compatible maps of a spill to ground crews and thus improve their response. 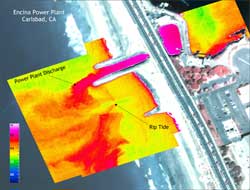 Ocean Imaging has purchased a state-of-the-art thermal imaging camera system from Germany's Jenoptik AG. Using custom-developed software, the camera is integrated with high-accuracy geolocation hardware and a near-real-time image dissemination system that allows instant transfer of captured imagery to ground stations for processing and analysis. Although the system was primarily purchased for advanced oil spill mapping research, OI intends to utilize it in a broad range of research and operational activities. The sensor has 0.08ºC thermal resolution and is fully calibrated. Spatial resolution is determined by aircraft flight altitude, allowing detection of even sub-meter size targets. It is highly portable and can be mounted and operated simultaneously with our DMSC sensor, yielding both thermal and multi-spectral UV-Vis-nearIR image data.

In collaboration with the GIS division of CDFG's Office of Oil Spill Prevention and Response (OSPR), OI will develop new capabilities to allow the rapid transfer of raster and non-raster data between various offices and agencies during oil spill response or similar emergency situations. Drawing on OI's experience in disseminating satellite imagery and other data to ships at sea, OI's development team will provide OSPR new capabilities to utilize state-of-the-art remote sensing and GIS technologies by emergency response teams in the field. The project will also involve integration of the system outside CDFG, primarily with the US Coast Guard. For example, a possible oil spill feature noted on a real-time Synthetic Aperture Radar (SAR) image received by OSPR headquarters can be disseminated to aircraft teams who will mobilize with a multispectral oil spill mapping sensor, verify the existence of the spill and send a digital map of the exact extents of the spill to field crews and the Coast Guard, who will initiate proper response activity. Based on the oil spill map, the Coast Guard may chose to deploy their own team and drop an oil spill sampling buoy to aid in identification of the oil's origin. OI plans to have an operational demonstration of the completed system within 24 months.

Through the years OI's fish-finding services have helped many anglers win fishing tournaments. But this one is for the record books. On 10/31/2006 a team of fishermen captained by Mr. Steve Lassley - a long-time SeaView subscriber and enthusiast - won the annual Bisbee's Black & Blue Marlin Tournament in Cabo San Lucas, Mexico for a prize totaling over $4.1 million! This set a new world record in sportfishing tournament history. Mr Lassley's team of top-notch sport anglers - "Bad Company 55" - won the competition despite it's being cut from 3 days to 2 because of a nearby meandering hurricane. In such conditions, having the very latest and most accurate oceanographic information, as SeaView provides, is vital. "I wouldn't leave the dock without SeaView, period!" says Mr. Lassley. He plans to utilize OI's services to expand his "dream team" winnings in other tournament locations, including Hawaii and the East Coast.

California's Sierra Mountains have been subject to intense mining activity since the 1800s. Some of this activity has left major impacts on the Mountain's vegetation and wildlife. One such area is the Leviathan Mine - an abandoned sulfur mine in AlpineCounty, California. Inactive since 1962, contaminants from the mine severely polluted a neighboring creek system and greatly affected surrounding vegetation and aquatic wildlife. Since the late 1990s local groups as well as the state and federal government have financed various remediation efforts to bring back the area's environmental health. In collaboration with CDFG, the Washoe Tribe of Nevada and California has contracted with OI to evaluate changes in creek-side (i.e. riparian) vegetation that occurred from the 1980s to the present. OI flew its DMSC aerial sensor over the mine-affected creeks, as well as a number of unaffected creeks for control purposes. Archived aerial imagery collected by the USGS in the 1980s will now be analyzed for the presence of riparian habitat and the two data sets will be utilized in a vegetation change analysis. OI also conducted its own field sampling work to train the classification algorithms and validate the result.